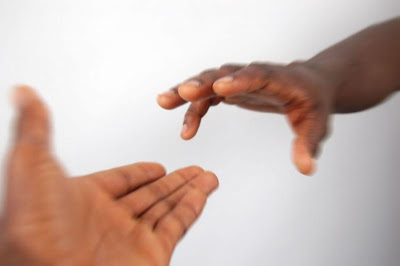 Grace, true grace, is an amazing thing. It sets aside justice (what the other person deserves), it offers mercy and then it goes even further. Grace gives the other person what they don't deserve! It's something only God can do initially. We would never be gracious, we don't even have such an idea in our imaginations, it's just not in our natures to think that way. But God has offered grace, shown us what it looks like in our own lives and invites us to imitate that as we relate to other people.
I have to tell you that I'm still working on this. I'm more of a "justice now!" kind of guy. Even mercy eludes me at times. But grace goes so far beyond either of those that it is totally unnatural to us, it's something that God must do through us. Grace does the very opposite of everything we would do and then goes even further. Grace is what the Christian lives in. Most Christians don't understand how amazing the grace of God really is. Grace is getting what we don't deserve. That's the simple definition, but it goes much much further. Grace is getting what we don't deserve, could never earn and it is offered even when we don't want it. Grace does for us all the things we could never do ourselves. It is at the heart of the finished work of Christ.
Grace is the story of a short chapter in 2 Samuel. It's a wonderful picture of what grace looks like. In chapter 9 David is finally established as king. As things settle down for him he asks this question, “Is there anyone still left of the house of Saul to whom I can show kindness for Jonathan’s sake?” From that simple question unfolds grace in its simplest form- justice suspended, mercy extended, grace provided to one unworthy of anything but death.
For our purposes here I won't tell the whole story, you can read it when you have time. The recipient of David's grace, a man by the name of Mephibosheth, son of Johnathan, was summoned to David's presence. I'm sure he expected death as he came into David's presence. He was the grandson of the former king and the logical heir to the throne that David now sat on. He was a threat to David's rule. But when he came into David's presence he didn't get justice, he didn't even experience mercy (although it was wrapped up in all of this as you read the story.) He got grace. David blessed him, provided for him, took care of him and made him like one of his own sons, eating at the royal table!
This man who expected death literally got the "royal treatment" and was treated like a king. Now, multiply that times 1,000,000 or more and you have a small idea of what grace looks like. It's at the very heart of the gospel- you can't earn it, you don't deserve it, you will never be good enough for it and yet God gives you all you need and more to live this life. And then, beyond that he calls us sons and daughters and invites us into eternity to be part of his family.
How could something like this be possible? There's nothing I can do to earn it? I can't be good enough to get it? And yet he offers it freely? Yes, you've got it....that's grace. That's why the message of Christianity is so different from any other. It's a message of "done" not "do." You only have to receive God's extended hand of grace.....
I'm thinking about this because I read 2 Samuel 9 this morning. I'm thinking about it because of lives I deal with, people I need to give grace to. I'm thinking...what would David have done? What would Jesus do? What would God tell me? And so I'm trying to navigate grace extended to those who don't deserve it. It's not natural, but it's what God has done for me, how could I do any less for someone else?
Posted by Mike Messerli at 7:59 AM

Thanks for your honesty, Mike. I am struggling with a couple of issues regarding grace and forgiveness of others. It's a tough call. I have a very forgiving spirit unless I am hurt very deeply. Then it's not that I can't forgive, it's that I don't know how to have a relationship with the person who hurt me. I guess that's where grace comes in.

Thanks for the food for thought. I love the story of David and Mephibosheth. I did a lecture on that passage many years ago. One of my favorites!