The prison of the past 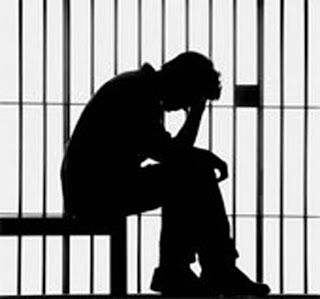 Many people I know are in prison.
They are not imprisoned for a crime. In fact they walk around apparently as free as you or I, but they are in prison as surely as if there were bars, a lock and guards to keep them contained.
The bars are their past, their upbringing, their habits, their choices, their mistakes, their "heritage."
They are in the prison of the past....the past sins they committed, the sins of others, the names they were called as kids, the things done to them when they had no voice or defense. They walk around us in a prison they can't escape.
I'm thinking of dozens of faces as I write this. Sad faces whose lives are dramatically captivated by the past....many in prison still.
The bars are strong.
The locks are secure.
It's nearly impossible to break them out. They know nothing different, nothing better. They are prisoners of their own past and are often completely unaware of what is happening to them. They have no idea what freedom looks like.....prison is all they have ever known.
One "prisoner" I'm thinking of ran away from a difficult home life at the age of 13. He has been running from difficult situations ever since. He's running right now. His bars are strong, he's imprisoned and unable to break out of his habit of running away from the problems and people in his life.
Another "prisoner" is a former missionary who was imprisoned many years ago and has never been able to see that she is the one held captive. She thinks her problems are caused by everyone else, but in fact she is the problem as she screams for attention from her prison cell.
You may be a prisoner yourself, captured by the past, unable to escape. There is freedom. There is a solution. Jesus came to break open the prison and set the prisoners free, and yet all around us people live their lives in prison still.
Paul wrote these words,

25 Opponents must be gently instructed, in the hope that God will grant them repentance leading them to a knowledge of the truth,26 and that they will come to their senses and escape from the trap of the devil, who has taken them captive to do his will.

"Held captive to do his will," what a picture that paints as Paul describes the captive ones of the enemy.

And Jesus addressed the prisoners as well when he said,

17 and the scroll of the prophet Isaiah was handed to him. Unrolling it, he found the place where it is written:

18 “The Spirit of the Lord is on me,
because he has anointed me
to proclaim good news to the poor.
He has sent me to proclaim freedom for the prisoners
and recovery of sight for the blind,
to set the oppressed free,
19 to proclaim the year of the Lord’s favor.”

Jesus declared that he came to proclaim good news- he came to set prisoners free. Freedom from the enemy, freedom from the past, freedom from sin. The bars have been constructed many years ago by some, but in a moment Jesus promises freedom. He holds the keys to every cell. Freedom is his desire for each of us....if we will simply ask for the freedom he brings.
I wish I could help those I meet see the prison cells they inhabit. I think they would be surprised to realize they have been captive for so long. The enemy tells them they are free to do as they wish, but the freedom of a prison cell is a mocking invitation to a freedom with no reality.
Jesus offers freedom to all. A true freedom from the prison of the past, freedom from the grasp of the enemy and the false sense of freedom the world offers. How much I long for my friends to truly find the freedom Christ offers each one of us....
Posted by Mike Messerli at 2:17 PM

You know it is so easy to live in the "prison" of the past. I think it is a struggle for many if no most of us...

I agree, Jon, and often we are unaware that we have done it.

I may have to blog this topic as well sometime! Very insightful thoughts.