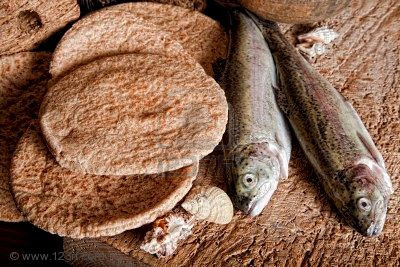 There is a story in John that captures my imagination.  Here it is, in my own words, with actual scripture in italics,

"Mom, can I go hear Jesus today?  I heard he was going to be in the hill country.  I got all my chores done. Can I?"  Mom: "Yes, Mark, but take some bread and fish so  you'll have lunch, ok?"  Mark: "Ok Mom, thanks!  See you at dinner."  And off he goes, a young man seeking God, with his lunch in his backpack.

Some time after this, Jesus crossed to the far shore of the Sea of Galilee (that is, the Sea of Tiberias), and a great crowd of people followed him because they saw the signs he had performed by healing the sick. Then Jesus went up on a mountainside and sat down with his disciples. The Jewish Passover Festival was near.
When Jesus looked up and saw a great crowd coming toward him, he said to Philip, “Where shall we buy bread for these people to eat?” He asked this only to test him, for he already had in mind what he was going to do.
Philip answered him, “It would take more than half a year’s wages to buy enough bread for each one to have a bite!”
Another of his disciples, Andrew, Simon Peter’s brother, spoke up, “Here is a boy with five small barley loaves and two small fish, but how far will they go among so many?”
Jesus said, “Have the people sit down.” There was plenty of grass in that place, and they sat down (about five thousand men were there).  Jesus then took the loaves, gave thanks, and distributed to those who were seated as much as they wanted. He did the same with the fish.
When they had all had enough to eat, he said to his disciples, “Gather the pieces that are left over. Let nothing be wasted.”  So they gathered them and filled twelve baskets with the pieces of the five barley loaves left over by those who had eaten.
After the people saw the sign Jesus performed, they began to say, “Surely this is the Prophet who is to come into the world.” Jesus, knowing that they intended to come and make him king by force, withdrew again to a mountain by himself.

Mark was glad to give his lunch to Jesus if it would help feed others, but he never imagined what happened next!  Jesus prayed over the food and then it began to multiply!  It fed everyone and when they gathered the leftovers they gave Mark 12 baskets full of food to take home.  He couldn't believe it!  It changed everything for Mark!  Now, he not only had the words of Jesus as he taught, but he had a new faith he never could have gotten on his own and he had groceries for the week!

Often, in our lives, we think our little gifts to God don't amount to much.  An hour here to help someone, a few dollars there to buy a meal for another, a smile for someone discouraged, an ear to listen to someone hurting, a prayer for someone else in need.  It never seems like much, but watch as Jesus takes small things and makes them big!

"What is that among so many?"  Those were the words of Jesus' own disciples.  They couldn't imagine what he could do with so little either, but their faith grew as well.  It changed their view of small things.  It made God big and isn't that what we need most?  Isn't our lack of faith simply a revelation of our small god?

What is that among so many?

It's always more than you could ever imagine when you give it to God.  He's the master of making great blessings from small gifts. He is a big God!

Posted by Mike Messerli at 9:26 AM

I just realized, as I read the first line of this post, that there will be a day when we can each "go hear Jesus" anytime we wish! That will be amazing.