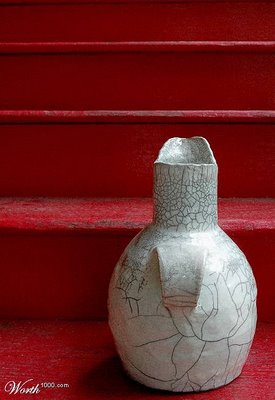 Years ago I was in southern Mexico on a mission trip with a missionary friend in the jungle. He took me to the little village to show me something very special. He told me that in the village was a potter who made pottery just as they did in the time of Jesus, in first century Israel. I was excited, looking forward to the opportunity to see pottery made as it would have been made 2,000 years ago.

We went to the potter's shop and watched as he made a vase. He spun the wheel with his foot, sitting on a little stool, and molded the vase into a beautiful piece of pottery. Suddenly he said something in spanish, only a word, and then, with his fist, he smashed the vase back into a pile of raw clay to start all over again.

I was shocked! I asked the missionary why he did such a thing, why he wasted all his work. He asked the potter my question and this is what he told us, he said the vessel had lumps in the clay. That's the word he had used, "lumps."

He explained that if the finished vase had any lumps in the clay it would crack when he fired it, so he had to smash it down to clay and work out all the lump, he had to start again and work the clay until all the lumps were worked out.

I often feel like that clay. I know I have lumps, but it's so hard when the Lord is trying to "get the lumps out."  Just when I think I'm getting somewhere in my walk with God I hear that word from the potter, "lumps" and we begin again to make a vessel that won't crack in the fire.

The work the Lord has to do in me, to keep me from ending up a cracked pot, is painful, but it's worth it. My goal is to be a vessel that God can use, so when the Lord is working on lumps remember the goal-


2Timothy 2:20-21- Now in a large house there are not only gold and silver vessels, but also vessels of wood and of earthenware, and some to honor and some to dishonor.Therefore, if anyone cleanses himself from these things, he will be a vessel for honor, sanctified, useful to the Master, prepared for every good work.

Posted by Mike Messerli at 2:27 PM