Have you ever heard the saying, "God works in strange ways?"

In Acts 8 the new church, right after the martyrdom of Stephen, huddles together to protect itself from being martyred as Stephen had been.  But God did something very strange,

"And on that day a great persecution began against the church in Jerusalem, and they were all scattered throughout the regions of Judea and Samaria....those who had been scattered went about preaching the word."

When danger came they turned inward to protect themselves, but God had told them to make disciples of the world.  That couldn't happen if fear kept them huddled in Jerusalem.  So God used persecution to scatter them and spread the gospel.

God works in strange ways.  I often look back with amazement at how he worked a wonderful result in an impossible way.  He does it so that we can't say to anyone that we planned it that way.  He does it so we have to say, "Wow, you are an amazing God!"

But his strange plans continue as you read Acts 8,

My friend Ken told me he can imagine God the Father poking Jesus with his elbow and saying, with a wink, "Watch this...."

God uses strange tactics to do amazing things so we will acknowledge that God is the only one who could have done it.

And on that desert road Philip waited.  No one around, alone in the desert.  I'm sure he wondered, "What am I doing here?" But off in the distance he sees a bit of dust as a caravan heads his way.  As it approaches he discovers it's a royal official from Ethiopia.  God whispers to him, "Go join him."

And from that encounter the entire nation of Ethiopia is changed. Philip is whisked away to another mission and God continues to work in amazing ways.

And he does that in our lives as well.  When we can't imagine how he could make anything of our lives we suddenly discover he has done the impossible.  God's strange tactics are intended for one purpose...the he get all the glory and we would reply,

What a wonderful and amazing God you are! 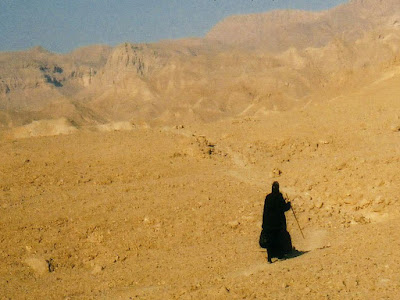 Posted by Mike Messerli at 8:10 AM