He has set a day

In Athens, many centuries ago, Paul spoke to a group of people with a simple message.  It's a  message we need to repeat often.  It's simple, but communicates these essentials- there is a God, we have a problem, God provided a solution, one day he will come and set everything right.  It's a profound message, one we need to hear and respond to, one we need to share with the world. Here are his words-

“The God who made the world and everything in it, this Master of sky and land, doesn’t live in custom-made shrines or need the human race to run errands for him, as if he couldn’t take care of himself. He makes the creatures; the creatures don’t make him. Starting from scratch, he made the entire human race and made the earth hospitable, with plenty of time and space for living so we could seek after God, and not just grope around in the dark but actually find him. He doesn’t play hide-and-seek with us. He’s not remote; he’s near. We live and move in him, can’t get away from him! One of your poets said it well: ‘We’re the God-created.’ Well, if we are the God-created, it doesn’t make a lot of sense to think we could hire a sculptor to chisel a god out of stone for us, does it?
“God overlooks it as long as you don’t know any better—but that time is past. The unknown is now known, and he’s calling for a radical life-change. He has set a day when the entire human race will be judged and everything set right. And he has already appointed the judge, confirming him before everyone by raising him from the dead.” 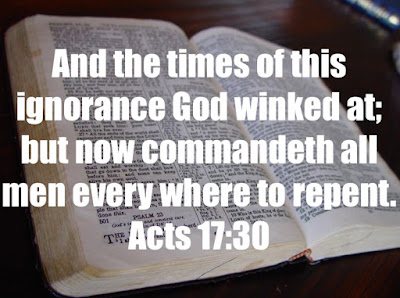 Posted by Mike Messerli at 7:47 AM