A prayer to the universe

In talking with friends in the last week they mentioned a conversation with their daughter who told them she had "thrown her prayers out to the universe."  I couldn't help myself, and replied without thinking, "tell her that the universe doesn't give a damn!" 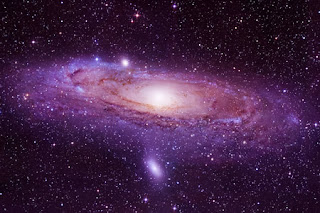 At first she was shocked at a pastor saying that, but then she couldn't help herself and laughed.

I didn't anticipate my words, but the comment made about praying to the universe was so absurd I couldn't help but respond.

And so I did a Google search.  Is this common? Do others really think this way? Do some in our culture "pray to the universe"?  And here is part of a prayer I found,

Divine Mantra , A Prayer To The Universe
"Oh Divine Universe,  gather together to form  one great ball of light  and allow it to come forth  with my Divinity...."

The whole prayer is much longer, but you get the idea.  Yes, people are praying to the universe!  They really believe it does something!  But I would reply to them as I did above...it doesn't do anything and the universe doesn't care!

Romans 1 speaks of these days when Paul writes,

"Yes, they knew God, but they wouldn’t worship him as God or even give him thanks. And they began to think up foolish ideas of what God was like. As a result, their minds became dark and confused.  Claiming to be wise, they instead became utter fools."

And so they "pray to the universe" and think somehow their "god" called the universe will answer, but it doesn't, it can't.  It's just a part of creation like I am.  Why not pray instead to the only one who is listening....the God who made me AND the universe, the God whose name is YAHWEH!

Posted by Mike Messerli at 6:11 PM

Sorry to giggle a bit at your very honest response...love it. And it is kind of surprising that someone would pray to the universe. Wow. So sad.

Why the hell do you care what other people believe in? God is different in every eye. For some, it's just faith. Is your God the only one? If so, prove it.

Anonymous, I rarely answer a question from anyone hiding behind "Anonymous" but I will answer you. I would ask you have the courage to come into the light and discuss this honestly instead of hiding in the dark corner and taking your shots at me. Quite a bold one, aren't you?

First, I care because I really believe there is a hell, there is eternity and our decisions matter!

Second, you shame me and ridicule me for claiming I know truth and then do it by claiming to know truth yourself. Quite a hypocrite aren't you?

I would love to know why you are so angry and how you found my site and read my article.

If you want to discuss this further do respond, but do it honestly and do it in the light of who you are, not as "anonymous."

Your words from September 5th. "It seems we waste a lot of time with opinions, words, rhetoric and anger that does nothing at all. And in the end....after all is said...nothing changes."
Allow me to show you how you to respond to a question. Instead of an example I'll respond to you first.

- Yes I am bold.
- I did not shame you. I don't claim to know any truth.
- I'm not angry with you at all. I'm simply curious.
- I found your website because I was wondering if people pray to the universe and wondering how they do it.

I've answered your questions. Now it's your turn. I only want answers. I don't appreciate your persnickety remarks.

Is your God the only God in your eyes?
Is every other religion wrong in your eyes?
What is this so called, "absolute truth" that no one believes in anymore?

In reference to your quote of the day; it's a terrible quote in regards to religion. You are assuming everyone is wrong because they don't think the same thing as you.

May I simply post your last thoughts and reply to them? Ok, here we go.....

Bailey: Your words from September 5th. "It seems we waste a lot of time with opinions, words, rhetoric and anger that does nothing at all. And in the end....after all is said...nothing changes."

Allow me to show you how you to respond to a question. Instead of an example I'll respond to you first.

- Yes I am bold. Mike: yes you are, thank you. I like that.
- I did not shame you. I don't claim to know any truth. Mike: then I apologize.
- I'm not angry with you at all. I'm simply curious. Mike: ok, thank you for that. It was unclear from your comments as to your motives.
- I found your website because I was wondering if people pray to the universe and wondering how they do it. Mike: yes, they do. The first time someone told me that I was surprised. I wondered where it came from and how they thought the universe would be able to help them. I still am not sure where that comes from and why someone would think it could help.

I've answered your questions. Now it's your turn. I only want answers. I don't appreciate your persnickety remarks. Mike: (Smiling) I was a bit persnickety, wasn't I? Haven't heard that word used in a while.

Is your God the only God in your eyes? Mike: May I reframe your question? I'm not smart enough to know if there are is one or millions of Gods. I do believe, from what I can read, that the very title "God" demands there be only one. It all has to go back to one somewhere, the one who created everything. I do believe the bible is true and it does say there is only one God. I have come to believe that is true. IF the bible is true then there can only be one. There are valid reasons to believe that, but it would take more time than we have right now. We can visit that topic later.

Is every other religion wrong in your eyes? Mike: "In my eyes". That does makes the question one of personal response, again, I don't claim to know all truth. I'm not the final authority on anything. I would be the most arrogant of men to say yes to this question, but, if the bible is right (and I believe it is) and if there is only one God, then any belief that would differ from that would be wrong. Those are not my words, but the words of the bible. In saying them the God of the bible appeals to all men to come to him and receive his love. He doesn't want to keep any out, but does want all to know him. It is hard to have more than one truth on any topic. For example, a pilot has to believe and respond to one thing to be safe and fly the airplane. A math student has to have just one right answer to a problem. Anyway, we can visit more if you wish on this.

What is this so called, "absolute truth" that no one believes in anymore? Mike: truth used to mean one thing, be universal and the same for all. In our day, this time of pluralism, truth has become personal, now it's "my truth". If each of us make truth personal it means there is no one true thing, but the idea of absolute truth means that most things have only one truth answer. I think that applies to religion as well.

In reference to your quote of the day; it's a terrible quote in regards to religion. You are assuming everyone is wrong because they don't think the same thing as you. Mike: That's not what I was trying to say. If that's what you heard I apologize.

Bailey, thank you for a return visit. My responses are brief here. There is so much more to discuss. Thank you for asking your questions. I'm sure, on some of these issues, I only confused the topic more, but I hope I answered your questions a bit.