"And we know that in all things God works for the good of those who love him, who have been called according to his purpose."  Romans 8:28

Have you seen my car? 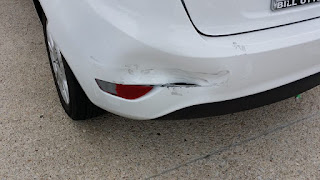 Yesterday morning I went to coffee with one of our guys.  As I pulled into the restaurant I saw one place to park in front of the restaurant, but then thought, "No, I'll park over there where there aren't any cars. That will be better." And so I changed direction at the last moment and went right instead of left.

My friend and I had a great visit and then, halfway through coffee, a man comes into the restaurant asking, "Who has a white Ford Fiesta?"

We both went out the parking lot to inspect the damage on my new little car.

He gave me his insurance info.  I gave him my business card, you know the one....the one with "pastor" on it.

We went back into the restaurant and my friend and I finished our coffee and paid the bill.  But before we left I went over to the man who hit my car and thanked him for being honest.

As I thought about it later I realized a lot of people were watching me....my young friend, the man who hit my car.  The waiter was looking as well.  What were they watching?

They were watching to see how I responded, how I reacted to my new car being hit.

The man who hit me was surprised, I'm sure, that I didn't get angry, didn't raise my voice, didn't act "normal" as our culture would expect.

You see,  years ago I decided that people are more important than things and so my response was already set.  I value this man I didn't know more than my new little car.

Here's what I know already-  my young friend watched my reaction, the man in the big truck who hit me saw something different, the people in the restaurant were watching......and out of it all I know one thing.....God will work in this little small situation to glorify his name and bring people to him.  Who knows, the man who hit me may have had a divine appointment with God to hit my car so we could talk about important things in the days ahead.

Yes, God works all things together.....even my little dented car....for good and his glory.  I can't wait to see what he does with this small little event in the days ahead because "ALL thinks work together....."