Thoughts on a friend

A dear old saint and friend died early this morning. He was 93. In just a few weeks he would have reached 94. His house caught fire yesterday and partially burned. Worried about him I went out to his house to check on him. Amid the fire trucks and firemen I find my old friend Norm. He's well and sorting out what to do about insurance and other necessary things. We visited for a bit. I made sure he was safe, and we talked about where he would stay last night. He has sons in the area and he told me he would stay with one of his sons.
This morning I got the call that during the night Norm died of a heart attack. Apparently the stress of the fire and all that followed was too much for him. I am sad to lose Norm. Even at 93 he was vibrant, clear headed and able to read his bible (9 pt font) without reading glasses. He had traveled widely and been all over the middle east. Often, as I taught the bible, Norm would be my color commentator. He was ornery. That's a right of anyone over 90, but he was sweet. As we studied a book I would often ask, "Norm, when you and Paul traveled through that area what was it like?" And with a smile he would tell us all about it.
How do you describe a godly man of 93? Perfect? Far from it, but he was a wonderful saint of God. He knew of God's care and provision and he talked often about it. He had been well provided for by God. He built his first home with his own hands using salvaged wood and supplies. Norm was an electrician by trade and had worked in that field his whole life. He 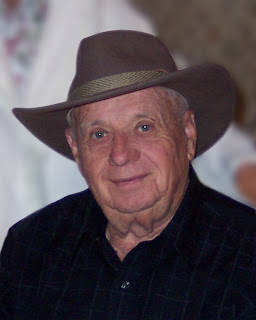 was the ultimate paradox in a number of ways, but let me simply say that men like Norm are wonderful blessings to anyone who knew him.
May memories of me be as sweet as my memories of Norm. Thank you, Norm, for loving God and living it out for others to see.
Welcome to the "Finishing Well Hall of Fame" Norm, you did well.
Posted by Mike Messerli at 3:52 PM