Thoughts on a day with the disciples 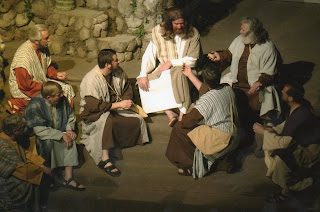 This last week I have been thinking about the disciples and their time with Jesus. Their heads had to be spinning most of the time as they lived with him. What an experience, one that would be hard to describe or commentary. They spent three years with God in flesh and yet, like me, they didn't get it. Here is a portion of their dialogue in Mark 8,

"...the disciples were finding fault with each other because they had forgotten to bring bread. Jesus overheard and said, "Why are you fussing because you forgot bread? Don't you see the point of all this? Don't you get it at all? Remember the five loaves I broke for the five thousand? How many baskets of leftovers did you pick up?"

"And the seven loaves for the four thousand—how many bags full of leftovers did you get?"

What an interesting question from Jesus, "Do you still not get it?" In other versions the wording is, "are your hearts hardened?" It's clear, from these miracles, they were supposed to understand something but they had completely missed it. They were right there in the middle of miracles and missed the purpose of it all!

A little earlier in Mark, as they struggled with the oars on the lake, Jesus came to them walking on the water and said to them, "Courage! It's me. Don't be afraid." In that brief statement is the thing they were supposed to get. It's right there in the middle of three short statements. Between his admonition to take courage and "don't be afraid" is the "secret" they (and we) are to get. Here it is- "It's me!" In the English we miss it entirely, but in the Greek it's once more a declaration of who he is, the very thing they were to learn from all the miracles.

"It's me." The two Greek words are ἐγώ εἰμι. In English Jesus is saying "I am". It's the same claim he made in John 8:58 and was nearly stoned for. It's the same name God told Moses to use to describe himself in Exodus 3. It's a claim to deity. As he walked on the water to these weary fishermen Jesus encouraged them. Between their lack of courage and their fears he reassured them with this- "I am" is here.

Some say that Jesus never claimed to be God, but standing on the sea of Galilee he proclaims it loud and clear, "Take courage, I'm God, don't be afraid." It's the same thing he says to us, the same thing he wants us to know, because he's God we can be courageous and abandon our fears. God is in our midst.