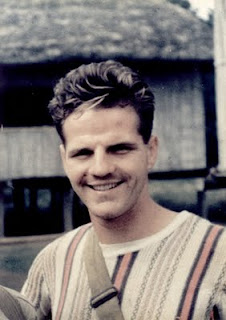 One of God's glorious failures in ministry is a man I deeply respect, Jim Elliot. Jim went to Wheaton College and had as his dream a missionary career to an Indian tribe in South America. He planned, with others, this quest into an unreached people group and then, with several others, went to their village to begin the work.

Before they could make first contact Jim and his team were killed on the river bank where they had landed their plane. I wondered today, as I thought about Jim, did he think as he lay dying on that sand bar, "I failed! I thought God wanted me to reach these people, but I failed! Lord, I'm sorry I failed you."

But the truth is that Jim and his friends were one of God's amazing divine failures. What Jim might have seen as failure as he lay dying God was using to raise up an army of missionaries to reach not only this tribe, but many others. What we might see as utter failure God uses as part of his plan.

I wonder at times if I'm one of God's great divine failures. There are times when I think so, but then I realize that being part of his plan means I don't see the end. I don't see what he's working on. I can't see my part in the play. This whole mission to the world thing looks completely different than we in the western world might think it should. God does things his way that all men might walk in his provision and glorify him.

If, like so many, I feel like a divine failure I should be thrilled. God does some of his best work with those who fail at everything they try. In this upside down kingdom called the kingdom of God I think Jim Elliot would say that a divine failure is the most exciting kind of success......because through it God is glorified!

Posted by Mike Messerli at 2:02 PM